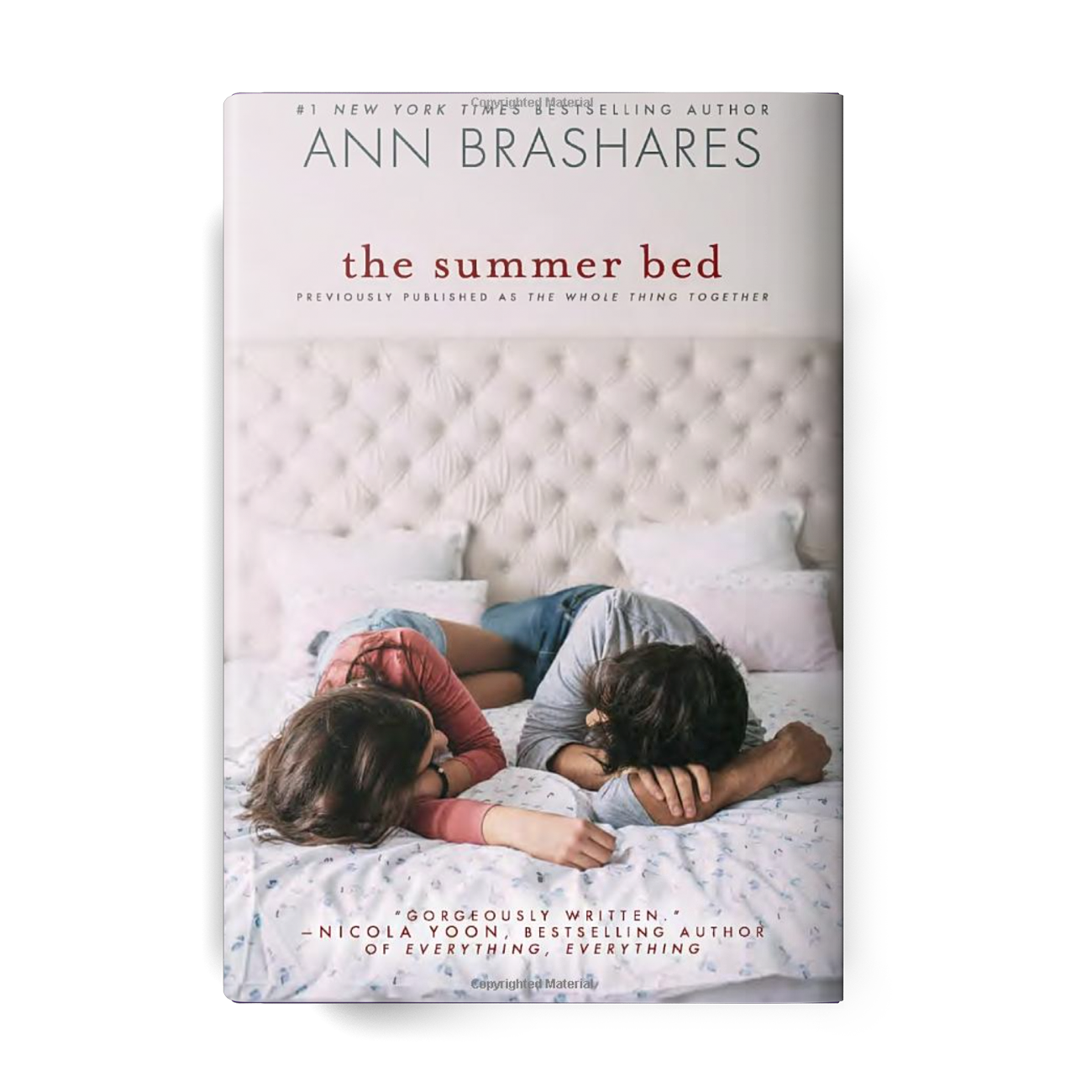 For Sasha, summer means time at her family’s sprawling old house out on Long Island. For Ray, it’s the same. Sasha and Ray aren’t related–and they’ve never met–but long ago, before they were born, Sasha’s dad and Ray’s mom were married. Then came a bitter divorce, remarriages, and a new generation of children. Now, the two families have an arrangement: use the summerhouse at your designated time and never cross paths.

Sasha and Ray do connect, though, by email–joking around, confiding in one another, forming a friendship. They’ve shared so much already . . . what would happen if they met in real life?

“Both funny and tragic, this sharply observed drama recognizes the complexity of split families trying to heal and the ill effects of longstanding grudges. Brashares’s masterful orchestration of plot, multidimensional characters, and intriguing subplots will delight her fans and newcomers alike.”

“Readers should have a few hankies at the ready for this deeply moving character-driven story.”

“At its heart, this is quintessential Brashares. Introspective questions of heritage are tied together, ultimately, by the bonds of family and the magic of summer.”

“A winning novel exploring complicated family relationships, love, grief, and forgiveness. . . . The author’s legions of fans will gravitate to this well-plotted work with mostly believable, thoroughly developed, and relatable characters.”

“Brashares delves successfully into the complexities of split and blended families in this novel. . . . The plot is engaging and the characters are well developed. . . . will appeal to new adults as well as high school readers.”

The smell of home for him, more than anything else, was the smell of a girl he didn’t know.

Home wasn’t the creaking three-story brownstone on Carroll Street in Brooklyn where he lived most of the time, but this big house on a pond that let out into the ocean on the South Fork of Long Island in a town called Wainscott. He’d spent half the weeks of every summer here and half the weekends for most of every year of his life.

Ray sat on the floor of his bedroom amid piles of books, clothes, old toys, blankets, rain gear, fishing stuff, and sports equipment, and he breathed it in, seeking her part in all of his.

It was an old smell, habitual and nostalgic, associated with the happiness and freedom of summer, the outdoors coming in. It was also a new smell, recharged every other week, adding particles of new shampoo, a new dress, shiny stuff she put on her lips.

On the achy and full feeling of it, he got up and lay on his bed, where her smell was always the strongest. It instilled old comfort, the privacy of nighttime. He always had better dreams here, almost never nightmares. In his bed in Brooklyn he had nightmares.

He lay there in his shorts and T-shirt. He let his sandy, dirty bare feet dangle, out of deference. He used to never think about things like that.

Sleep in this bed, though sweet, had gotten fitful in the last year or so. Sweetly fitful. Sweetly frustrating. The smell, with its new and extra notes, got to be as stimulating as it was comforting. He didn’t know exactly what those notes were, but they stirred his night thoughts in a new way.

He sat up. His mom’s knock and entry were practically one motion.

“Did you empty out the whole closet?”

He glanced back at the dark, walk-in closet. “Most of it. I tried to leave Sasha’s stuff how it was. But some of it is mixed together. And some of the stuff I’m not sure of.”

“It would be easier if there was a light in there,” his mother pointed out.

He nodded. He probably hadn’t replaced the bulb in two years. He hadn’t cleaned the place out in a lot longer than that.

Lila gave him a look. “Seriously? You just threw everything on the floor. You have to deal with it.”

She retied the bandana around her head. Her pants were covered in old paint and clay stains. “You should see the kitchen. You’re lucky I’m not asking you to help with that.”

He got up, not feeling lucky. “Why are we doing this again?”

“The girls organized it.”

“The other family is doing it too, next week.”

“We should have gotten them to go first.”

“Just get back to work, Ray. I left trash bags and boxes in the hall. Stuff you want to save put in boxes. You can bring them out to the storage room when you’re done and stack them neatly on the shelves.”

Almost all the books were hers. Her entire Harry Potter collection still stood there, along with Narnia and His Dark Materials. He’d contributed The Hobbit to her Lord of the Rings set. He’d read almost all her books except the really girly ones, sometimes at the same time as her. He got indignant when he was reading one of her books, like the last Harry Potter, and she brought it back to the city.

He got out a recycling bag for his old comic books and his random piles of school papers. Among them he found one of her old science tests (91%) and her handwritten book report on Charlotte’s Web. You would never mistake her rounded, regular script for the mess he made with a pencil.

The cabinet devoted to seashells, sea glass, smooth rocks, egg cases, and sharks’ teeth was joint property. He couldn’t begin to say who’d found what. They’d both been big hoarders on the beach. And all of it belonged to the sea, didn’t it? He got rid of some crumbling coral and left the rest as it was.

He didn’t bother with the bureau—since middle school he’d let her have the whole thing except one big drawer at the bottom with old sweaters and sweatshirts they both used. He kept his small and unimpressive wardrobe on two shelves and one hanging bar on the left side of the big closet. The medicine cabinet was at least ninety percent filled with her stuff. Granted, he had hardly any toiletries, in large part because he used her stuff. He was happy using her shampoo, taking a part of her smell around with him. He hadn’t provided toothpaste or dental floss in years.

There was a lot of semibroken or useless crap to get rid of. He spent some time going through the fishing gear. He had to admit it took up more than his share of the closet, but she was welcome to use it if she took good care of it. They had one boogie board between them and he still took it out sometimes.

Did she? He didn’t know. He found himself hoping so. He always imagined she loved this place, this pond, this beach, the weird house, this old camp bed under the skylight, as much as he did.